As a little kid in upstate New York, I grew up with a lot of rabbits and by a lot, I’m talking about 20-50 at any given time. We had a large property and my dad kept them on the back of the acre in hutches he had built. These were not fancy rabbits such as Lion Heads or Holland Lops, just plain old big bunnies that dad raised as meat rabbits. Mom and dad would use the large amount of rabbit manure that was generated by the bunnies in the garden and I remember our garden being bountiful at that house. We moved from New York when I was ten and that was the end of my rabbit adventures until last spring.

As a gardener, I had of course heard the rumblings of how good rabbit manure was for growing plants but hadn’t put too much thought or effort into it. I had started vigorously composting my yard waste, kitchen scraps, and dry items such as cardboard/egg cartons several years earlier and had fully producing compost bins and was using that to enhance my soil. A lady I worked with knew I was a gardening mad woman and she happened to have rabbits. She asked if I wanted her rabbit poop when she cleaned her cages. Sure, rabbit poop to add to the compost with no work on my part? Sounds great! So a couple of times during the growing season she would bring me a two buckets full.

But what if I were to get my own rabbits? How hard could it be? We had them when I was a kid, and dad continued his rabbit hobby in Florida, so I could pick his brain and figure it out. 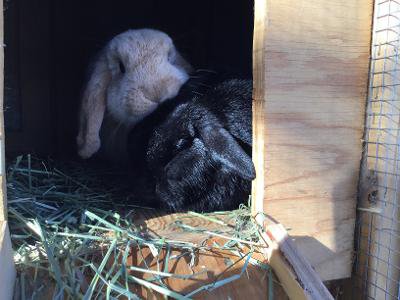 Spring 2020, my husband Will, and I were visiting Vicki’s amazing garden and she had two rabbits! I knew I could have some if Will would just build me a simple hutch. Vicki tells us they do not take much effort on her part for care and we discuss the fact that you can easily find people giving away rabbits and hutches on Craigslist.

Two weeks later I have found an ad on Craigslist for two rabbits with their small indoor cage for $40.00. A bargain even if it doesn’t equal being “given away”! Will gives in to my request for them but insists this is my thing and he will not get stuck having to care for them when I am too lazy to do it. “Of course,” I say, all I will need help with is building a hutch for them. Important note, these rabbits came from a family with a little girl and were kept as pets, so they were spayed/neutered, litter box trained, and had been handled a fair amount. I had no interest in having bunny babies or getting bit so these rabbits were a good fit for me. Rabbits do bite if they are not socialized, I vividly remember being bit by Butch, one of my dad’s rabbits, when I was little! 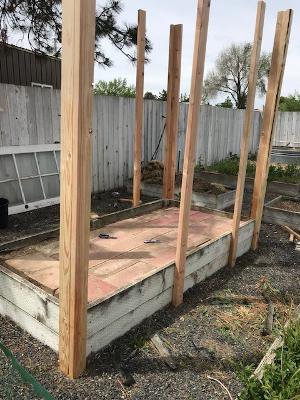 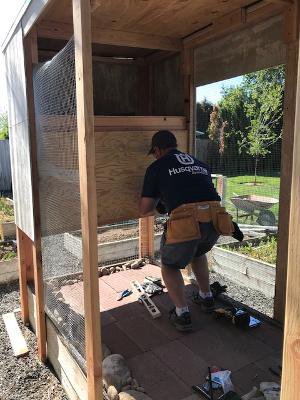 I had an existing raised 4X8 foot planter bed in my back yard that is shaded by a large pine tree and I deemed it the perfect location for the hutch. All we had to do was build a frame and some walls, no big deal. It took Will and I about a week of measuring and cutting every day after work and on the weekend to get the “simple wooden hutch” built for Buttercup and Lily. Here are the photos of the hutch building process and the end cost was about $300.00. We had some challenges because the planter base was not a level starting point. But, the paver bottom is genius… they can’t dig out. I love being able to get right inside the enclosure with them and it keeps me out of the weather while feeding and cleaning the cage. I am able to store all of the food, straw, hay, and cleaning supplies right at my fingertips. We made sure the wire mesh covers the inside of the planter box and 2x4 supports. Rabbits do like to chew on wood and the planter box is made of chemical pressure treated lumber so I definitely did not want them ingesting any bad stuff. Ideas for creative rabbit enclosures abound on Pinterest. 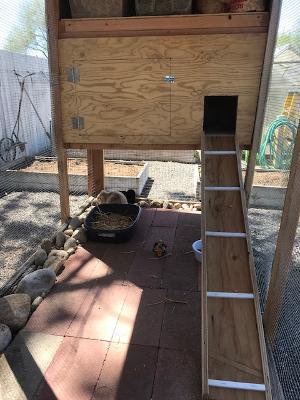 So far, one spring/summer and half a winter into being a rabbit owner, caring for them requires a minimal time commitment. I have straw for the litter box and Timothy hay for them to eat. I also give them pelletized rabbit food every day…. about ¼ cup per rabbit and make sure they always have fresh water. They get produce scraps from the kitchen in small quantities (be sure to research what is and isn’t healthy for them). I bought them a couple of toys, which seemed silly but Buttercup really does like to throw the ball around. 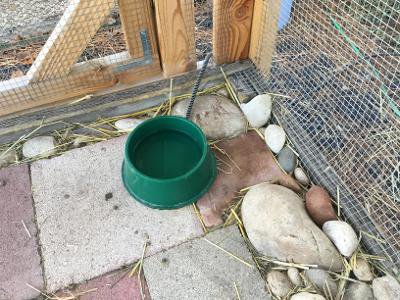 Per my dad, the heat will kill a bunny faster than the cold. It gets dang hot here in Idaho for a couple of weeks during the summer. I saved milk jugs and Gatorade bottles, filled them with water, and froze them. During the hot summer days, I put a couple in their hutch for them to lay next to and cool off. Make sure you take the plastic labels off or they will eat them. Buttercup and Lily did bite into the milk jugs and cause them to leak eventually but the sturdier Gatorade bottles held up all summer.

In the winter they have to be able to get out of the cold and wind, therefore an enclosed section in the hutch is important. Their ears can easily get frostbitten. The winter is pretty moderate in Boise, so Buttercup and Lily are doing great in Periwinkle Palace. My only freezing weather consideration was getting a heated water source. I tried the bottle that attaches to the side of the cage first but found that I prefer the small, heated bowl.

I completely empty their litter box every other day into my compost bins and mix it right in with everything else I was already composting. Rabbit poop is a cold manure and does not have to be composted before using it among your plants, mine is mixed with the urine and straw though so I do compost it. At first, I wondered if two rabbits would generate enough poop for my needs, they absolutely do. By the way, Will does help me care for the rabbits when needed and enjoys visiting with them more than he expected. 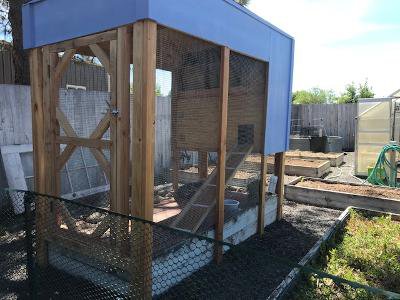 Recently, I noticed that Lily had quite the caked buildup of poop on her hind end. I called dad and he said it was probably loose stool caused by the vegetables that I was giving her. He recommended just feeding the pellets and Timothy hay for the near future and keep an eye on her. Over the next two days, morning and afternoon, my husband held Lily by her scruff so that I could take a warm, wet towel and work on dissolving, cleaning her hind end. She did not enjoy it so that is why we did it in several short sessions instead of trying to get it all at once and stressing her out for too long. Clearly, if her hind end is blocked and she cannot go to the bathroom this will quickly lead to a serious problem. I will check on her regularly and if it happens again we will have to go to the vet or research causes other than her food. So far so good though.

By guest blogger: Jenni, she is camera shy but her garden isn't!

Jenni calls her hilltop garden, Nectar Hill, and lives in Boise with her husband and 2 rabbits.